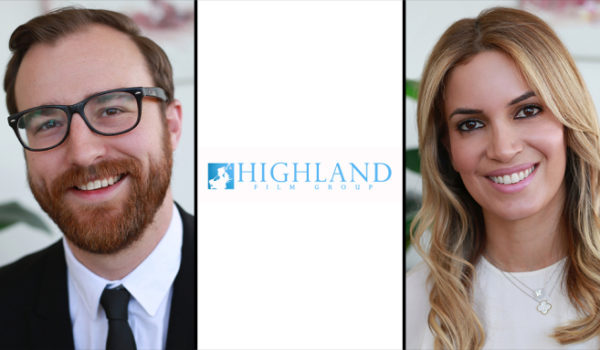 Ward will oversee feature acquisitions and production development for Highland’s global sales slate reporting to CEO Arianne Fraser and COO Delphine Perrier. He will also work alongside JJ Caruth, President of Domestic Marketing & Distribution, in acquiring projects for The Avenue.

Ward recently served as Director of Acquisitions at Freestyle Digital Media, the digital distribution unit of Byron Allen’s Entertainment Studios Motion Pictures, where he acquired such indie movies for theatrical and Premium VOD as What We Found, Teenage Badass, Clover and She’s in Portland. He also ran Freestyle’s film festival and market coverage program, which supplied commercial feature film and TV content information directly to global digital platforms including Netflix, Amazon and Hulu. Ward is the creator and director of the late-night program at the Colorado-based SeriesFest and also served as a programmer for North Carolina’s Cucalorus Film Festival.

Prior to Freestyle, he served as film acquisitions coordinator for The Orchard/1091 and before that as marketing, theatrical and digital sales coordinator at Gravitas Ventures.

“We are proud to see Highland Film Group grow stronger with the launching of The Avenue last year. Despite the challenging times, we continue to support and believe in this industry that we all love so much. Our growth would not have been possible without our dream team. Each one of the members of our team is at the top of their games. For this reason, we could not trust in better hands the expansion of the company, which consequently broadens the scope of their roles. With the addition of Caleb, the promotion of Anita, and the expansion of the roles of Todd, Laura, Monique, and Sebastien, our ship will continue sailing at great speed,” Highland’s Fraser and Perrier said.

“I am thrilled to have Caleb join me as we discover those great independent feature films looking for the perfect home for domestic audiences. Since we launched The Avenue last year, we have seen an increase in the number of projects we can consider. With Caleb’s experience and keen eye, we are certainly set to build an impressive domestic slate packed with content that our audiences will love,” said Caruth.

Said Ward: “I am enthusiastic to be joining Arianne, Delphine, JJ, and the entire Highland Film Group family on this new venture in domestic releasing in addition to culling through a wealth of talent for the best new works and storytelling available for the worldwide marketplace. My goal is to diversify the landscape of our releases and I cannot wait to, along with the Highland Film Group, discover some great new voices both domestic and abroad.”

In Levian’s new role, she will oversee all day-to-day business and legal affairs for both Highland Film Group and The Avenue as well as draft and negotiate all in-house agreements including foreign and domestic licensing agreements, interparty agreements, collection account agreements and sales agency agreements.

Since the launch of The Avenue, the roles of Olsson, Voros, Green, and Aussal have included new responsibilities in the domestic arena.

Green is now CFO for the entire organization overseeing all financial aspects of both companies and the synergies between them. Olsson and Voros will play a key role in The Avenue’s acquisitions as the company grows its domestic distribution ops.

The Avenue has an agreement with Paramount Home Entertainment to handle its Blu-ray, DVD, VOD and digital distribution. Avenue pics include Jiu Jitsu starring Nicolas Cage, Tony Jaa and Frank Grillo, and upcoming movies such as Renny Harlin’s The Misfits starring Pierce Borsnan, Nick Cannon and Tim Roth, which will be released this summer in theaters as a joint release with Paramount.